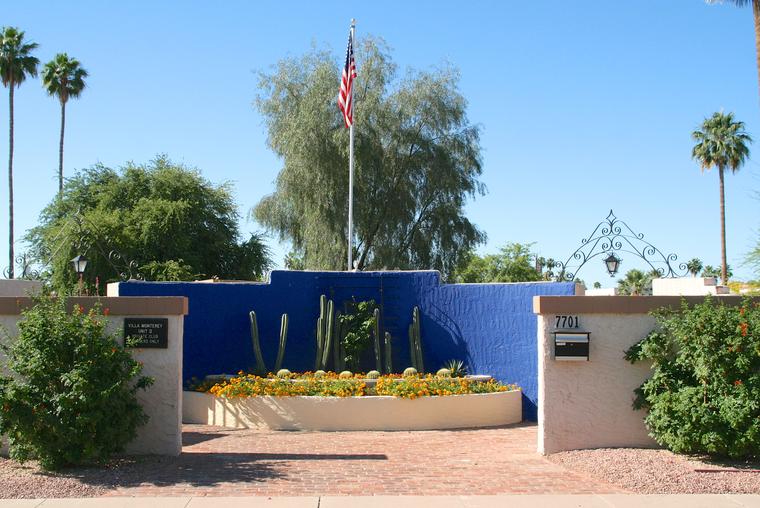 More than fifty years ago David Friedman built and named this first “Villa Monterey” on the east side of Miller Road just north of Camelback Road along the western boundary of the Indian Bend Wash.  David and his wife, Trudy got the original idea from a trip to the Monterey Peninsula and Carmel areas of California.  They were fascinated by houses built close together in neighborhoods that retained their charm and practicality.  They also liked the Mediterranean concept of a private walled-in patio at the rear of each home with streets centered around a walled–in common recreational area containing a pool, spa, library, and social area.  This idea was unique back in 1962 since ownership of one of these cluster homes was neither a cooperative or condominium ownership.  The purchaser actually owned his/her home as well as the land underneath it.  You would receive a recorded deed protected by title insurance.

Unit II was actually the first of the nine Villa Monterey “Colonies” built by Freidman with each having its own name, Board of Directors and set of by-laws.  Friedman hoped to attract retirees from all over the United States.  Indeed, our present residents hail from all over North America and Europe.  The layouts of our 1 bedroom/1 bath, 2 bedroom/2 bath and 3 bedroom/3 bath units have maintained buyers’ interest.  Most have been remodeled several times….but the basic plans are still practical.  Title to the ungated entrance grounds, the gated recreational areas, as well as the small street corner areas, is vested in the homeowners associations incorporated as non-profit corporation.  Each owner has one share of stock which entitles him/her to vote in the affairs of the community managed by a volunteer elected Board of Directors (who in turn elect the officers).

Before someone can occupy a residence he/she must make an application and be approved by the unit Board of Directors.  The application states that the prospective owner understands and agrees to abide by the restrictions and regulations which contain conditions of age restriction binding on all occupants.  Renting of units is also restricted and limited to application to the Board.  The purpose of these restrictions was to keep Villa Monterey as an adult community where owners would maintain the quality of their neighborhood.  In 2012 several Villa Monterey sections, including our own VMRA II, were declared Historic Preservation Neighborhoods.  Our homes are older, but the quality of the community has been maintained…as well as the safety and security of our residents.  I think Dick and Trudy Friedman would have been proud to see us now.

(This information was adapted from a 1986 25th anniversary pamphlet written by Fredric P. Rich)